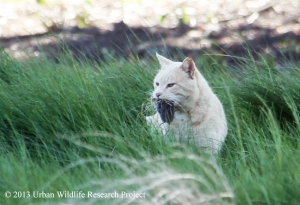 Feral Cats on the prowl, an all to frequent sight while documenting urban wildlife. Some cast aside by their human owners, others born wild on the city streets, creeks, and open spaces. We decided to take a look at just two out of many 100s of feral cat colonies in wildlife designated areas of the Santa Clara Valley and examine the cat’s possible environmental impacts. By observing these cats we know that many species of wildlife fall prey to feral cats: Insects, rodents, reptiles, amphibians, and birds are impacted. All ground dwelling wildlife has to keep a keen eye about them when in the territory of a feral cat. These two colonies are in wildlife areas that are also habitat to many threatened and endangered species of wildlife like the Salt Marsh Harvest Mouse, Tiger Salamander, and the Steelhead Trout. Some cat colonies can grow quite large and consist of more than a dozen cats. These feral cat’s wild diet could possibly impact the available prey base for native predators like the Gray Fox and Red-tailed Hawk.

Another impact on wildlife associated with feral cats are the feeding 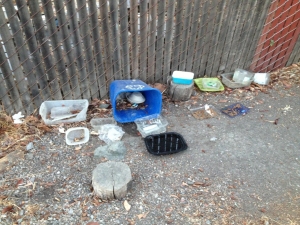 stations. They are maintained by volunteers or private citizens to help keep cats healthy. Some feeding stations receive a delivery of multiple pounds of food each day. The feeding stations can often be found in or around wildlife designated areas. One sign we found on a feeding station, bordering the habitat of the small, ground nesting, Western Burrowing Owl read “this is a humane project for 100% benefit of our feline friends” but is it humane for the wildlife? We hypothesized that the cat food is not curbing the cats will to hunt. Like a house cat that is well fed, if its let outside it most likely will start stalking the first little creature it sees, hungry or not. Could it be their predatory nature?

After witnessing cats hunting in a few of these well fed colonies we began to discover that wildlife was eating the catfood as well. We found kibble in the scat of Raccoons and Gray Fox and Greg Kerekez personally witnessed skunks and many species of birds eating from the feeding stations. From his notes on May 14, 2012 he observed two species of bird, California Towhee and Oak Titmouse take the cat food back to the nest to feed their young.

Night after night Skunks and Raccoons fought each other over the cat food. Skunks dominated the bowl with 74% of the visits, up to 5 skunks at a time would fight over the bowl, the

most aggressive skunk has a stomach the size of a beach ball, probably from eating so much cat food. Raccoons were next in line at 15% of feeder visits, some also looking overweight. The Gray Foxes made up 7% of the visits and were the most calmly tempered, they arrived early and shared the bowl with one another willingly and would quickly give it up if a skunk or raccoon entered the area.

The targeted species, feral cats, made up only 4% of the visits and frequently arrived to an empty bowl. This means that wildlife is eating almost all of the food at this feeding station. We hypothesize that these feeding stations are influencing aggressive behavior in the wildlife and could impact the health and weight animals. With so many mouths eating out of one bowl this feeding behavior could also possibly aid in the spread  of disease.

The people maintaining these feeding stations would benefit from looking into how wildlife uses their feeders. They may be affecting the natural cycles and health of wildlife and the cats may be a minority at the feeders.  The feeders have many possible negative implications for wildlife. For wildlife’s sake, we might want to start looking at putting restrictions on cat feeding stations in and around wildlife designated areas.

We realize that one feeding station does not speak for all and at some stations  we’ve seen cats waiting to be fed when the feeders are filled. This is why more study of multiple feeding stations needs to occur. We encourage people involved in feeding the feral to monitor their feeders for wildlife activity and to not leave bowls of food unattended overnight.

To review the preliminary data from the cat feeding station click the link below.