by Bill Leikam, The Fox Guy 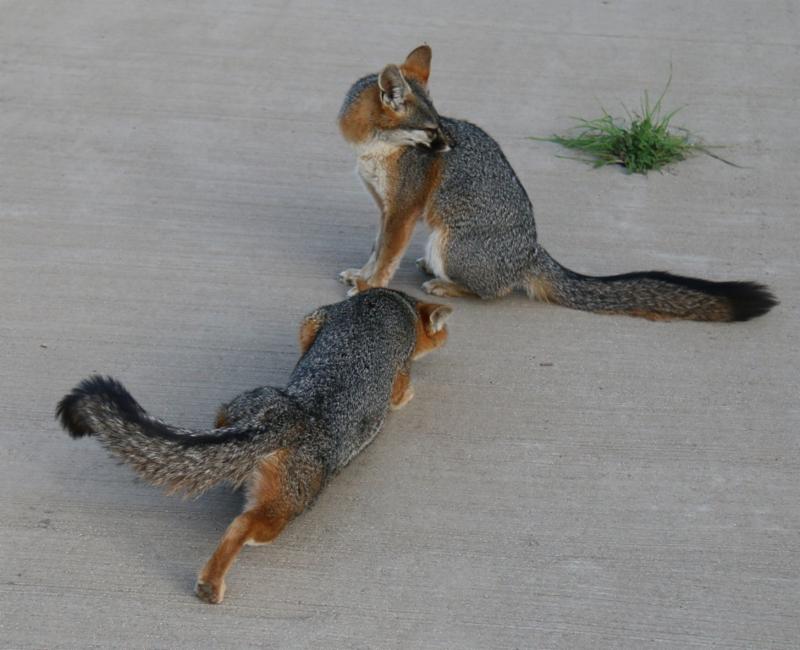 It’s the waiting time; that time when many of the females are staying close to their natal dens. There are exceptions, however. From all indications, short of actually seeing them, Mama Bold has given birth to her litter in the old natal den (continuously in use for 24 years) where she and so many other gray foxes in the local area have been born. Dark Eyes, has been absent for the past two weeks. That suggests that she is either denned up or she too has had her litter. (I do not trespass into the actual natal den and that’s why I do not know for certain if the pups have been born.) Little One’s sides still bulge with pups yet to come. Then there’s the adult female Cute who, last year had a single pup. I’m not sure whether she is pregnant or not.

Lately, over the past two weeks or so, she’s behaving very differently from her usual self. Before the onset of this “new” behavior, she’d trot along at a quick pace, sit and scratch, and groom; all the usual things that gray foxes do but lately she appears to be “spaced out” as though her mind and attention is elsewhere. She slowly walks along the edge of the grass, sometimes reaching up to pluck away a stalk of wild wheat. She seems to be in her own world and I suppose that could be due to changes due to pregnancy manifesting in this changed behavior. If Little One and Cute are pregnant, they should be giving birth within the next two to three weeks as April tends to be the birthing month for these gray foxes.

With the coming of new litters, the gray foxes have already “staked” out their territory but what does one do when there are two dens virtually side by side? The two males Blue and Dark have been struggling for that territory. It’s obvious that neither likes the presence of the other. For instance, one day when Blue lay at the edge of the grass next to the brush, Dark saw him. The two males bristled, arched their tails – an indicator that tells all in the vicinity to beware – and in the flick of an eye, Dark shot off after Blue. They crashed through the brush, and in their flight I heard the breaking of dead branches as they tore beneath the canopy. Within 10 minutes after that chase, Blue sat at the edge of the grass and the brush-line looking for Dark.

Upon examining and tagging my trail camera video files, on 3/17/2015 the gray fox Blue casually walked out into the big clearing, when suddenly he dashed off, came around and flew past the camera with another fox in immediate pursuit. At that time, it was just two foxes chasing. It wasn’t until that afternoon when I saw the gray fox male Dark limping along the trail that I realized what had happened. Putting two and two together, it was obvious that Blue and Dark had fought the night before and that Dark’s knee had been nipped. It wasn’t a serious bite in that four days later, Dark no longer limped.

It’s hard to tell what’s going to be resolved, if anything, because both males “claim” the territory. It appears as though Blue and Dark Eyes have teamed up and will have pups. Last year she had four but I never saw her mate, or at least I don’t think I did. Even to date I’ve not seen Blue and Dark Eyes together grooming each other as do Dark and Cute, but then again each pair have their own, individual ways of responding to each other. Last year they had a single pup that I came to call Midget and during the months as their pups developed, all of the pups and the adults got along reasonably well although on occasion the pups got into fights. In one of those fights with another pup Tippy of Dark eyes litter, Midget had a laceration above and below his left eye. It festered but eventually healed.

As previously noted in the February fox report, there are four adults in the area that had pups and reared them during the 2014 season. Two of them, Papa Gray the male and Mama Bold the female, have maintained and secured their territory. The other adult foxes that I have been monitoring are the aforementioned adult female Cute her mate Dark, and then in another location there is Little One, that had no litter last year but looks to be pregnant this year. She has paired up with a newcomer to the area, Brownie. The other pair are Blue the male and Dark Eyes the female. There is one female adult, Helper, that had no pups this past season nor over the two previous seasons. It appears as though she will not have a litter this season as well. I am beginning to think that she is a barren/infertile female gray fox. Total adult population that I have been monitoring for the past four years equals nine adults including Helper.

As for the number of juveniles still in the area there are three: Tippy and Pale. These two pups never dispersed.

This gives a total of both adult and pups remaining at the baylands to eleven gray foxes. In July 2014, there were 26 pups and adults combined.

As an update on events occurring with the UWRP:

This year we expect to be funded by the National Wildlife Federation (NWF). Amount is unknown at the moment.

Until next month, I hope that your endeavors are productive and rewarding.